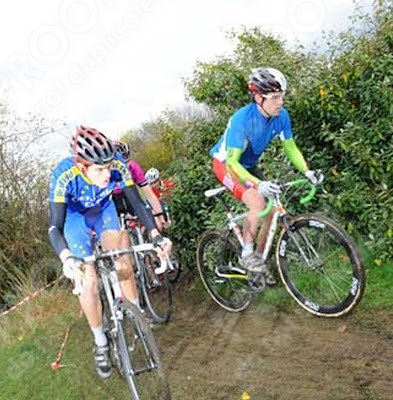 My first. However, London never fielded a B Team before and as the gridding is done based upon last year's positioning it meant life was simple for us: at the back!

With a 70-odd field as near to that of a National Trophy event, we were always going to be at something of a disadvantage. Conditions on the drive up to Leicester were foul. Driving rain and wind left the course fearfully slippery but by the time the Vets and Women had raced, the ground had compacted a bit and the sun showed its face in time for the Senior start.

The Dugasts were an absolute revelation! I experimented with the bite-point on our practise lap when Andy said "How are the new tubs?" to which I replied "They feel REALLY grippy" -shortly later he rounded the bend to find me sprawling around in the mud. They genuinely are though! Around the slippery, muddy, off-camber twists and turns you can turn in faster and get on the power significantly sooner. When they do start to go, it's predictable and you can get it back, unlike my Gommitalias which, once they're sliding...

Anyway I rode stayed on the gas in a measured effort -feeling the previous evening's exertions and managed to make some inroads into the field in front of me. I managed to cross the line at the head of the B Team, allowing the final member of the A-Team to finish in front of me in case I inadvertantly robbed them of any points.

Legs are absolutely screaming in agony now but I look forward to reaping the rewards of a double weekend.

Pic:Joolze Dymond -how's that for a cacophony of kits??
Posted by Ben at 06:34